Glasgow, situated in the west of Scotland, is the largest city in Scotland. Thanks to its position on the Firth of Clyde, which in turn gave it access to the Atlantic Ocean, Glasgow became an industrial and commercial powerhouse, in fact, during the Victorian Era, Glasgow came to be known as “the Second City of the British Empire”. Signs of this rich heritage are still to be found in the towns which stretch out along the river, like Port Glasgow, Greenock and Wemyss Bay. Within easy distance of Glasgow are some excellent places for day trips, the National Park of Loch Lomond and the Trossachs; the magnificent Stirling Castle; distilleries; glacial lochs; craft beer breweries; botanic gardens and impressive sea lochs (fjords) are just a few things on offer. Or why not visit the Southwest of Scotland, taking the coast road you will pass small fishing villages, breathtaking views over the sea to the Clyde Islands, of which, the most famous is Arran, known as “Scotland in Miniature”, carrying on you will see ruined, medieval castles, as you arrive in “Burn’s Country”, this area is associated with Scotland’s National Bard, Robert Burns, writer of the world famous “Auld Lang Syne” and “to a Haggis” which celebrates Scotland’s National Dish , haggis (made of sheep’s offal). Only 50 minutes to the east of Glasgow is Edinburgh, Scotland’s capital, or closer still, the historic towns of Linlithgow, with its ruined Royal Palace, or the historic, UNESCO site of New Lanark Mills. So, let yourself be inspired by these suggestions, as just some of the many things you can do if you choose Glasgow as your base. 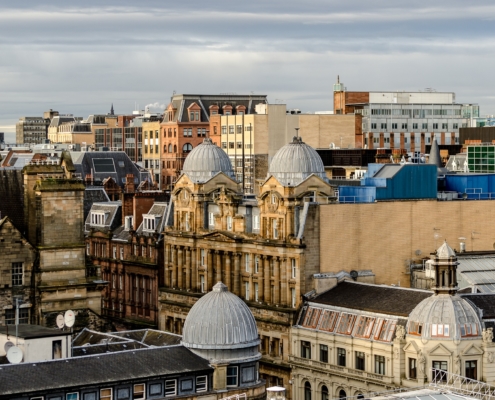 Duration of excursion: Half day up to 5 hours; Full day up to 9 hours.

LOCH LOMOND AND THE TROSSACHS

STIRLING AND THE TROSSACHS

THE CLYDE COAST AND THE SOUTHWEST

Suggested route and visits: The Clyde Coast and the South West with its resorts and ports; Greenock; the county of Ayrshire; the Clyde Islands; Island of Arran, Culzean Castle and Dunure; the village of Alloway and the Robert Burns Museum; Robert Burns Cottage and the Brig O’ Doon.

Edinburgh, Scotland’s capital situated on the Firth of Forth near the North Sea on the East coast. This elegant city holds UNESCO titles, the medieval Old Town and the elegant Georgian New Town are one, whilst for the other, Edinburgh was chosen as the first, ever City Of Literature by UNESCO, This city will charm you with its picturesque, medieval streets to its Georgian opulence in the New Town. It is the city which gave birth to Robert Louis Stevenson, Walter Scott and Arthur Conan Doyle, and today, the authors Ian Rankin and JK Rowling call this city home. As well as numerous museums and galleries, the city also offers great shopping and wonderful, traditional bars and restaurants. From here it is a short hop down to the Borders, this region, south of Edinburgh, and which borders onto England, is very much associated with Sir Walter Scott. Beautiful, rolling hills and green fields, old monasteries and abbeys, fortified homes and sheep make this a great day trip. Another short hop, this time going north is Saint Andrews, home to Scotland’s oldest university (from 1413), as well as being the home of golf. Stirling, with its castle and monument to William Wallace, but also its proximity to the Highlands makes this another great day out. Loch Katrine, immortalised by Walter Scott in “Lady of the Lake”, is a beautiful day trip, this Loch was a favourite place for Victorian day-trippers and holidaymakers. Glasgow, just under an hour from Edinburgh, is also well worth a day out, this city , with its rich industrial heritage and connections to great inventors such as John Logie Baird and James Watt, but also its charming and delightful parks and museums! Linlithgow Palace, birthplace of Mary Queen of Scots, is well worth a visit and is only a stone’s throw from Edinburgh. If you are a fan of industrial architecture and history, then why not head down to New Lanark, a UNESCO World Heritage Site for history but also some great nature walks in the Clyde Valley. So, let yourself be inspired by these suggestions, as just some of the many things you can do if you choose Edinburgh as your base. 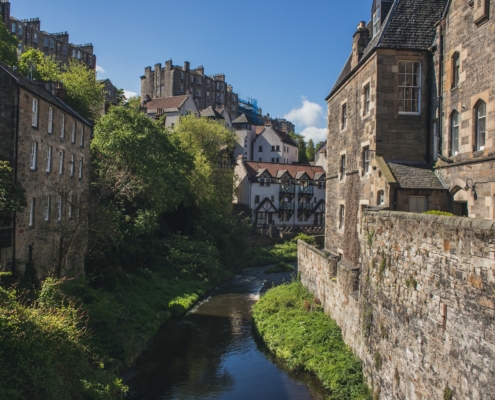 ST. ANDREWS AND THE FIFE COAST

Duration of excursion: Full day up to 9hrs.

STIRLING AND THE TROSSACHS

Duration of excursion: Full day up to 9hrs.

Duration of excursion: Half day up to 5 hours; Full day up to 9 hours.

This site uses cookies. By continuing to browse the site, you are agreeing to our use of cookies.

We may request cookies to be set on your device. We use cookies to let us know when you visit our websites, how you interact with us, to enrich your user experience, and to customize your relationship with our website.

Click on the different category headings to find out more. You can also change some of your preferences. Note that blocking some types of cookies may impact your experience on our websites and the services we are able to offer.

These cookies are strictly necessary to provide you with services available through our website and to use some of its features.

Because these cookies are strictly necessary to deliver the website, refuseing them will have impact how our site functions. You always can block or delete cookies by changing your browser settings and force blocking all cookies on this website. But this will always prompt you to accept/refuse cookies when revisiting our site.

We fully respect if you want to refuse cookies but to avoid asking you again and again kindly allow us to store a cookie for that. You are free to opt out any time or opt in for other cookies to get a better experience. If you refuse cookies we will remove all set cookies in our domain.

We provide you with a list of stored cookies on your computer in our domain so you can check what we stored. Due to security reasons we are not able to show or modify cookies from other domains. You can check these in your browser security settings.

These cookies collect information that is used either in aggregate form to help us understand how our website is being used or how effective our marketing campaigns are, or to help us customize our website and application for you in order to enhance your experience.

If you do not want that we track your visist to our site you can disable tracking in your browser here:

We also use different external services like Google Webfonts, Google Maps, and external Video providers. Since these providers may collect personal data like your IP address we allow you to block them here. Please be aware that this might heavily reduce the functionality and appearance of our site. Changes will take effect once you reload the page.